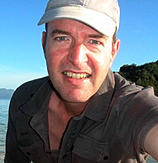 I got my first teaching job in 1984, working at a large boys secondary school in El Obeid, Sudan. This experience made it very clear to me that there's a lot more to teaching English than just being able to speak the language! I returned to Britain and did a very inspiring teacher training course at Pilgrims, Canterbury. I then went on to teach in Turkey, and then Brazil, and then Spain, with a further teacher training course at International House, London, and finally a masters course in Teaching English with Aston University. My book writing career began during my time in Brazil, with the publication of Pronunciation Games. I followed up with another photocopiable resource book Singing Grammar. After that, I started writing course books and other study materials, including English Pronunciation in Use, Pen Pictures and the four-level adult course English Result. These last two titles were written in collaboration with Annie McDonald.

Paul Seligson has been teaching EFL since 1978. He started with International House in Algeria and France, and then moved to the British Council for whom he worked in Egypt, Venezuela, and Spain, where for five years he was theAssistant Director of Studies in Valencia. After a year writing in the USA he moved back to the UK and worked in various ESOL colleges, mainly teaching immigrants and refugees. He now works freelance, dividing his time between writing, training, andtravelling. In 2000 and 2001 he worked for OUP in Brazil as a teacher trainer. He has an MA in TEFL, and is co-author of English File Levels 1 and 2, published by Oxford University Press.

Russell Stannard is a freelance trainer and conference speaker in ICT and Education. He has won 3 internationally recognized awards for his work in feedback and his www.teachertrainingvideos.com website, which is now visited by more than 350,000 users a year. He was previously a Principal Teaching fellow at the University of Westminster, where he won their ‘Excellence in Teaching and Learning’ award. He now works part-time at the University of Warwick as a Principal Teaching Fellow and is also a  NILE associate trainer. Russell wins University of Westminster ‘Teaching Excellence’ award Russell’s pioneering work on feedback using screen cast tools has generated enormous interest. He suggested that teachers could screen cast tools to provide  feedback to students on their written work ( click this example). He first published an article about the idea in the Modern English Teacher in June 2006.This was followed by articles in the national press including the Guardian, Independent and the Times Higher as well as reports in the HEA andJISC. Later his work was included in a report submitted to the British government and he also appeared on French TV. He has now presented the work in 23 countries. There are large scale research projects taking place in several countries around the world including the USA, Norway and Canada. Russell’s work was recognized by the University of Westminster and he was awarded the Excellence in Teaching and Learning award in 2008.

Annie has worked in ELT for 25+ years, teaching EFL/ESP in Turkey, Brazil, Spain and England, to both secondary school and university students. She holds an MSc in Teaching English from Aston University, and is a former president of TESOL-Spain. He co-authored English Result, a 4-level English course for adults (OUP, 2008-2010), Authentic Listening Resource Pack (Delta Publishing, 2015) and Out & About (a two-level course for Bachillerato, CUP, 2015) all with Mark Hancock. She's currently teaching in England and writing teaching materials.